Our community's magnificent mountains and picturesque fjords are just part of what Fjarðabyggð has to offer. Equally memorable to those who visit are the communities and the culture of our seaside villages, each with its own spirit and character nestling along Iceland's easternmost coast. Every year, the Fjarðabyggð combination of landscape, history and easy going attitude towards life attracts more visitors.

You can easily find the hotel or guest house best suited to your desires, or choose one of Fjarðabyggð's six campgrounds. You'll also find plenty of choices for recreation, in a municipality where both mountain slopes and seashores lie just beyond your doorstep.

No matter where else you're heading in East Iceland, Fjarðabyggð will be worth every minute you spend here. Check out our wide range of services and recreation for travellers and come enjoy the wonders of East Iceland, at all times of the year!

Comprised of six fjords, Fjarðabyggð is often referred to by locals as the Fjords. Also, the name of the municipality, which is the most easterly one in Iceland's, has a strong fjord connection, meaning literally the people of the fjords or the settlement of the fjords.

The fjords, from north to south, are Mjóifjörður, Norðfjörður, Eskifjörður and Reyðarfjörður, which extends the farthest west of them all. Fáskrúðsfjörður is next, lying south of Reyðarfjörður, and last but not least is Stöðvarfjörður at the south entrance of Fjarðabyggð.

The municipality's six villages, rich in traditional seaside heritage, are ordinarily referred to by the names of the fjords they are located in, although the most populous village, Neskaupstaður with 1,400 residents, is in Norðfjörður.

You are in a good place

Fjarðabyggð has as a slogan "Þú ert á góðum stað", which translates in to Fjarðabyggð as a great or wonderful place. It appears in publicity material and serves as a guiding light for municipal policy.

The six villages each have a slogan depicting a unique trait of each place. A Hidden Treasure is true for Mjóifjörður, as one of the most remote but beautiful fjord in Fjarðabyggð. Norðfjörður can be recommended for the Exciting Peace and Calm of the town and A Seaside Story referres to the old and distinguished seahouses in Eskifjörður.

Reyðarfjörður's slogan, as the geographical center Fjarðabyggð, is Home to the Heart, and for Fáskrúðsfjörður it's C'est la vie. This small town served for more than 200 years as the main base for French fisheries in Iceland. And Stöðvarfjörður can easily be seen as The Realm of Rocks, with Petra's Stone Collection, one of the largest privately owned collections in Europe, as the front-runner.

Fjarðabyggð has two officially protected country parks. Indeed, the country park near Neskaupstaður was the first to be protected in Iceland. This park extends to the base of Mt. Nípa sea promontory and has been protected since 1972. Hólmanes, the municipality's other country park, is located on the peninsula between Eskifjörður and Reyðarfjörður. Part of it has also been designated a nature reserve.

Fabulous scenery can be seen not only at these two locations, but widely throughout Fjarðabyggð. For instance Gerpir, the huge area stretching between Norðfjörður and Reyðarfjörður, is becoming one of Iceland's most popular hiking spots. Members of the Touring Club of the East Fjords have staked a large number of trails, as well as elsewhere in the municipality, making the Gerpir area accessible even for visitors.

One of the world's best-known mines for Iceland spar is located near Helgustaðir, Fjarðabyggð, where this crystal was mined from the 17th to early 20th centuries. This site is now protected as a natural monument. However, the local authority and the East Iceland Natural History Institute have plans to open the mine once more, making it an even more interesting place to visit.

Another leading attraction of Fjarðabyggð is the Oddsskarð skiing area, where two lifts interconnect to total 1200 m in length. Skiers starting at 513 m in altitude thereby end up at a height of 840 m, with a superb view out over Reyðarfjörður and even northwards to Norðfjörður. Oddsskarð also offers a children's lift and a comfortable lodge with eating and drinking facilities.

Fjarðabyggð has a wide range of services to offer. In the service industry are thriving eating and drinking establishments as wel as new opportunities in guest accommodations. Social and cultural activities are also flourishing, along with sports and youth work.

Most of the six Fjarðabyggð villages offer not only excellent compulsory schools but also music schools, preschools and youth centres. It is worth noting that the fees for public services are among the lowest in Iceland.

Together with aluminium production, fishing and fish processing are the main fields of employment in Fjarðabyggð. Three of Iceland's largest fishing companies, Síldarvinnslan, Eskja and Loðnuvinnslan, are located in the municipality, as well as the Alcoa Fjarðaál aluminium smelter. Agriculture is most prominent in the valley above Norðfjörður.

Fjarðabyggð Harbour runs the second biggest export ports in Iceland. Few locations receive more landed fish than the municipality's harbours and together with the produce of the Alcoa Fjarðaál aluminium smelter, the export adds up to one third of the total export of goods from Iceland.

A few facts on Fjarðabyggð

...a number of major festivals take place in Fjarðabyggð every summer, so many in fact that some believe it to be a a world record, considering that the population of the municipality is only 4.700 inhabitants.

...the East Fjords are, geologically speaking, one of the oldest parts of the country, or around 13,5 million years old - which is also the reason why world famous stone collections can be found in Fjarðabyggð, like Petra's Stone Collection in Stöðvarfjörður.

...if you're lucky you might see whales lazing around in one of the fjords in Fjarðabyggð and maybe some seals too.

...puffins, ravens and mountain pigeons are a part of the local bird population in Fjarðabyggð.

...that in Iceland reindeer can be found only in the eastern part of the country. In the summer they keep themselves in remote places in the central highlands, but are usually more easy to spot in winter.

...Norðfjarðargöng tunnel, connecting Eskifjörður and Norðfjörður, will be opened in 2017, replacing the current Oddskskarð tunnel.

...the Gerpissvæði area is a fantastic outdoor space with majestic coves such as Vöðlavík and Sandvík.

...Sandfell in Fáskrúðsfjörður is a World Heritage Site as one of nature's wonders; the rhyolite mountain demonstrates clearly how rock formations can break their way through to the surface.

...in 2007, Franciscans, of the Capuchin order, erected the first monk monastery in Iceland since the reformation. The monastery is located in Kollaleira at the bottom of Reyðarfjörður.

...in the beginning of 1942 the family of farm Veturhús rescued 48 Britsh soldiers who came close to death while training in the highlands. A brutal storm broke out unexpectedly and eight soldiers did not make it. They were put to rest in Reyðarfjörður cemetery. The rescue was against all odds, earning the family a decoration by the British government for an outstanding accomplishemnt. 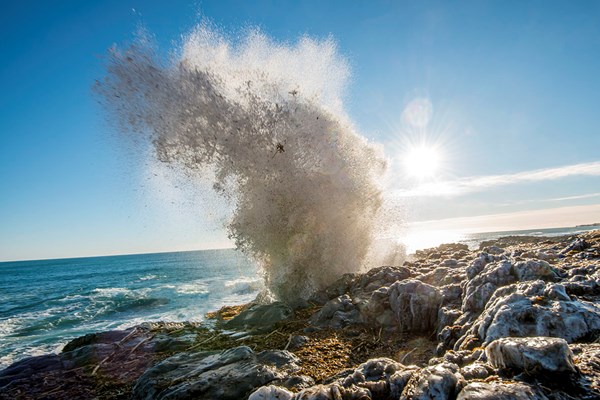